VOLTA FOOTBALL returns with more flair all over the pitch and new ways to express your style and connect with your squad in street football playgrounds all over the world. 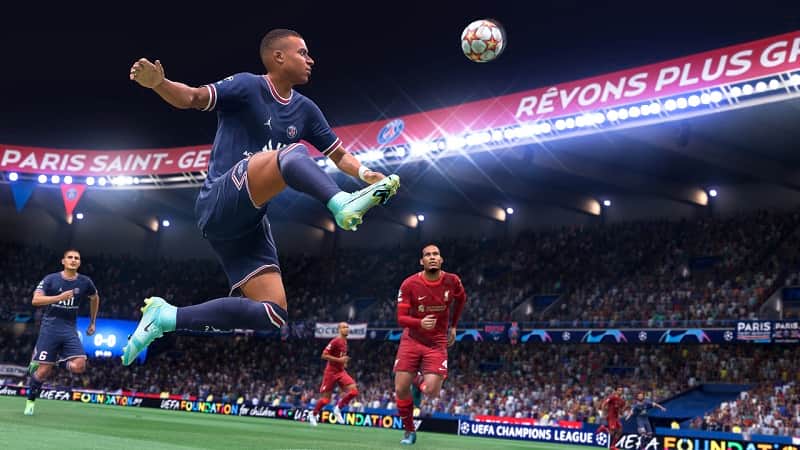 Longer two-touch animations make controlling the ball more natural and fluid than ever before. Take down aerial balls with more technique, get more agility when trapping ground balls, and enjoy more strength in shielding situations to give you new ways to drive forward in FIFA 22.

Powered by Advanced 11v11 Match Capture, new off-ball player animations and ambient behaviour help bring on-pitch characters to life. See opponents talk, point, and direct each other based on the action, while updated locomotion matches players’ urgency on the pitch to make FIFA more realistic and immersive than ever.

Live out your football dreams in FIFA 22 Career Mode as you create a club and lead them from relegation candidates to global giants, and enjoy an overhauled Player Career experience that gives you more ways to progress, achieve, and immerse yourself in your Pro’s journey through the game

A brand new goalkeeper system brings a new level of intelligence to the last line of defence, unlocking more reliable shot-stopping and smarter decision-making between the posts. Goalkeeper positioning personality replicates the different styles of keepers throughout the game – to represent the lightning-fast reflexes of world-class shot stoppers.

A new gameplay mechanic that changes the dynamic of one-on-one situations, Explosive Sprint gives you more control over acceleration when dribbling or defending. Lure opponents in and choose when to unleash your full speed to get away from the defender as you drive your team forward in attack.

Set up your team with different styles in each half of the pitch with new attacking tactics that give you more control over how you play in FIFA 22: keep the ball in your half and explode into attack with fast build up in the opponent’s, play direct from box to box, or line up in your own unique style.