LOGITECH DRIVING FORCE SHIFTER ₦36,700
Back to products
Next product

The whole family can enjoy PS4 games and entertainment together. Learn about account settings, parental controls, and more.

Something new and amazing is always in reach. Find what you’re looking for and get it at the touch of a button 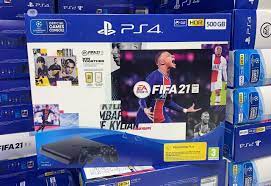 Sony is slimming down the PlayStation 4, following the company’s usual modus operandi of releasing an updated and redesigned version of a console part-way through its lifecycle.

Available for sale on September 15, the new slim PlayStation 4 is about 30 percent thinner and adds one notable new feature, support for HDR content, which allows for greater dynamic range in lighting, for brighter, bolder-looking visuals (although we’re still waiting for games with HDR modes, so it’s not the most useful new feature at the moment).

Hardware-wise, it’s pretty much the same, with either a 500GB or 1TB of storage, and plays the same library of downloadable or disc-based games as the older PS4. If you want improved graphics, you’ll have to look at the upcoming PlayStation 4 Pro, which supports 4K output and content.

Side by side against the older PS4, the difference in size is readily apparent. While the footprint is mostly the same (the older PS4 is just a little bit wider), the slim version shows off its successful weight-loss program results by being about half an inch shorter.

Aladdin and The Lion King